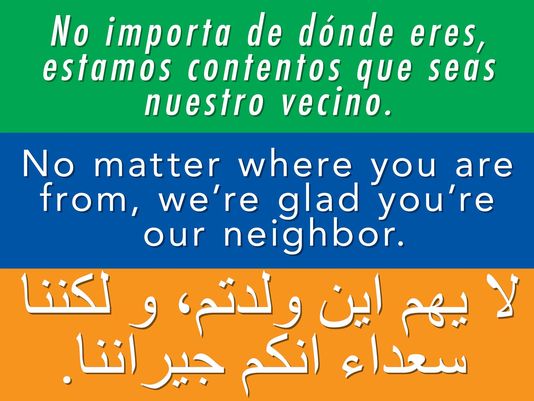 Join Welcoming Gainesville & Alachua County in demonstrating that we are a community of inclusion and respect. WG&AC decries hate-filled, exclusionary rhetoric, such as that promoted by Richard Spencer and his followers. We have had several requests for yard signs prior to Mr. Spencer’s October 19 event at the University of Florida and would be happy to distribute them to those interested. Signs (plus metal stand) are $10/each. Please e-mail us at welcominggainesville@gmail.com for more information. Thank you!
September 24, 2017September 24, 2017Leave a comment

During our September 2017 Welcoming Week, we shared the following “Immigrants of Gainesville” photo series on our Facebook page. Each photo and accompanying story was provided by Gainesville’s own Reneé Hoffinger and her “Humans of Gainesville” page on Facebook. We hope you enjoy it!

Today’s featured neighbor is Aziz who says his life motto is to “be open.”

“I’ve been really welcomed. I feel like Gainesville now is a second home for me. I’ve been telling my friends that I feel like I’ve been reborn again here. The amount of unconditional love and acceptance is really moving.”

We’re pleased to share the story of Shazara, pictured here with Jason and Sam while observing the solar eclipse from the La Chua Trail boardwalk.

Her words to live by: “Be kind always.”

“There certainly have been challenges throughout life growing up as an immigrant, but for the most part I’ve found that people are very warm,

generous, and accepting – especially my husband, who is obviously not of my own culture. Especially as a child I think I met with a more difficult time growing into my own. I think maybe you just tend to reap what you sow and I just tried to be nice to everyone.”

Originally from Senegal, Baye says, “There are ups and downs, but more ups than downs. Every experience is only what you make of it. So, I just decided to take what is positive and what is good for me and everything else I let go.” 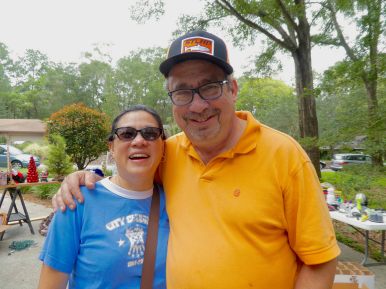 How sweet are these two?

Today’s share highlights Perry and his partner Olga, who was born in the Dominican Republic, but has lived in the

States since 2003. Catch her at the Publix deli sometime soon!

Olga: “He is my big support, his sense of humor.”

Perry: “Olga is just a great person. I just really appreciate who she is. Plus, she is funny and we have a lot of fun together.”

Perry: “She lived in Spain for 5 years before coming to the States and then was in New York before living in Gainesville. She used to have the Green Plantains, a fusion Caribbean/Latin/Chinese food restaurant down by Williston Road.”

Olga: “Now I work for Publix in the deli. It’s still food-related but having your own restaurant is a lot of work. Everybody keeps asking me if I will open another one and I say ‘no way.’”

Cheers to you, Rosanna!

Rosanna is an environmental horticulturist at the University of Florida. Born in Peru, she came to the United States at age 25 to pursue a PhD in Michigan. She’s lived in Gainesville for the past 11 years.

Of her experience as an immigrant, she says, “I’ve been lucky that I’ve been legal the whole time. After the last election, me and a many of my friends were a lot more sensitive and just had the feeling that a lot of people would hate us just because of our appearance, which I had never felt before. But I haven’t actually experienced any of that.”

WG&AC loves Chopstix Cafe! Today’s feature shares the story of Titi, one of the owners of Chopstix and Chopstix Bistro.

“My dada told us: ‘Always appreciate everything you have today because not everyone is fortunate.’ We escaped in the 70s after the communists, but I still have family in Vietnam that didn’t get to leave. We were refugees in camps in the Philippines and then in Indonesia before we came to the States. So, just appreciate everything that we have today and work hard at it.

“When we first arrived to the States, we felt as a minority. We came to Gainesville, and there were only 3 other Vietnamese families at that time. We had to keep it in the family, to speak Vietnamese. My brother, sister, and I–we all speak Vietnamese fluently. Now that we have kids, we try to get them to speak it as well. We have always felt absolutely welcomed in Gainesville. We are still in close contact with our parents’ first friends with whom they went to school. We love Gainesville! We arrived here in the 80s and never left.” 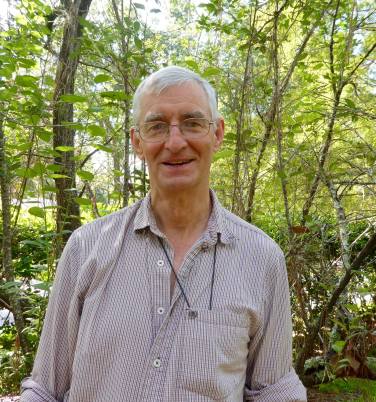 Meet Eric, an “English person” who came to the United States in 1981.

“I never thought I would ever come to the States. ‘America? Sort of a big foreign country. Nah, that isn’t something an English person would do.’ … I need to go back to the old country to visit the place, as well as family, so I do that once in a while. Also, to recharge my accent. The accent is invaluable, because you Americans think that anyone who talks like me must be intelligent, well-educated, and has a deep ability to spell words correctly. There are a number of other special features about having this accent.” 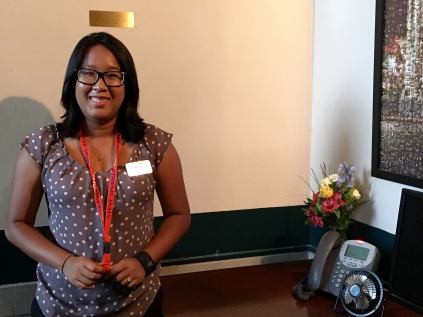 Pongruethai (aka “Andrea”) moved from Thailand with her family when she was 12. The new house manager at the Hippodrome Theatre, she says her words to live by are: “Don’t live in the past.”

“I started middle school here so I was a little scared. The education system is different and I had to spend most of my time telling my teachers, ‘You need to speak slower or I can’t understand what you are saying.’ I remember telling one teacher I had a question and she said, ‘Shoot!’ I just stood there because I didn’t quite understand what was happening. I eventually did learn all these idioms.” 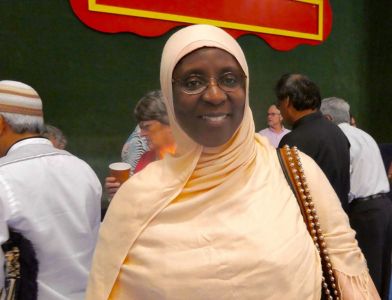 Today we’re sharing the story of Nigerian-born Nike (pronounced ‘knee-kay’) who has been a Gainesville resident since 1996 and is now a naturalized U.S. citizen.

Words to live by: “Be good. No matter where you are, do good.”

“We came to the States because my husband got a job and then moved to Gainesville because I started school. I now teach high school biology. My immigrant experience has been very good, very easy. I’ve never faced any difficulty. I love living in Gainesville. It’s very international–so many people from all over the world–and people are so accepting.” 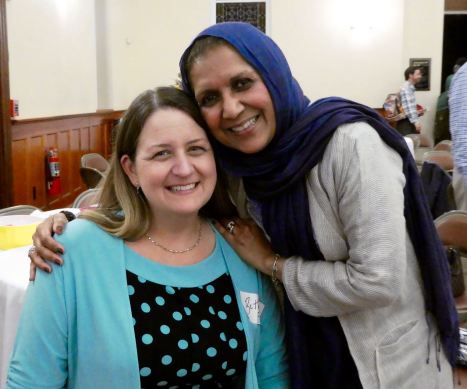 It’s the last day of Welcoming Week, and we are thrilled to highlight one of our board members, Aqueela Khuddus!

One of the most generous and open-hearted people we know, Aqueela is pictured here with Senior Pastor Beth Farabee from First United Methodist Church who says she appreciates Gainesville’s interfaith collaboration and celebration.

“I’ve been really excited about is I did interfaith work down in Orlando, but then I went to Eustis for 4 years and didn’t have as much opportunity. So to be able to come here and do it and meet Aqueela, I feel free. It just feels so good.”

Thanks to The Independent Florida Alligator for highlighting our Welcoming Week event: Gainesville celebrates immigrants with second annual Welcoming Week! 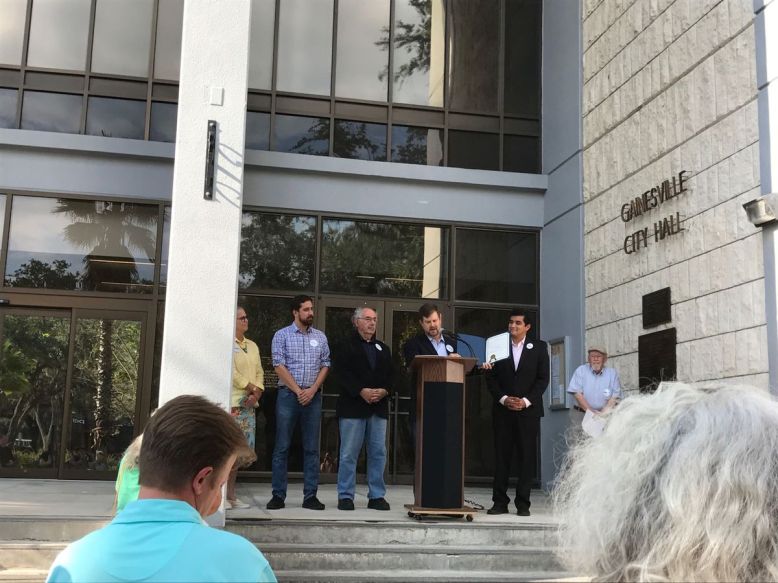 We had a great Welcoming Week proclamation and kick-off last night! Thanks to all our local representatives, participants, and residents for joining us to celebrate our immigrant neighbors and friends!

Here are a few photos of the event. We hope to see you at anotherWelcoming Week: September 15-24, 2017 event soon! 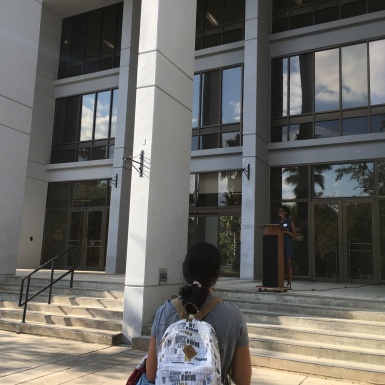 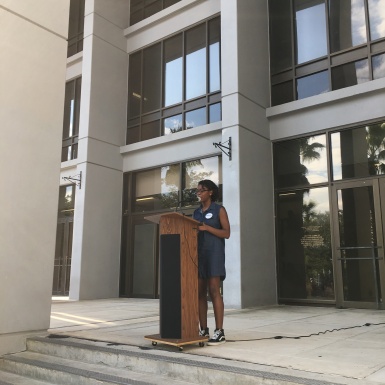 September 5, 2017September 5, 2017Leave a comment
Our collection for Catholic Charities Jacksonville and Gators for Refugee Medical Relief is underway!
If you have any of the items listed below, please bring them along to a Welcoming Week event or drop them off at Emmanuel Mennonite Church, Gainesville during the following times:
– Sundays between 10-11 am or 12-12:30 pm
– Thursdays between 12:15-1:30 pm
– Monday, Sept. 11 between 6:30-7:30 pm
– Saturday, Sept. 9 or Saturday, Sept. 23 between 10-11:45 am
– Wednesday, Sept. 27 from 5:30-6:30 pm
– Wednesday, Sept. 6th and Wednesday, Sept. 20th between 7-9 pm
Gators for Refugee Medical Relief can use any and all school supplies (notebooks, writing utensils, folders, etc.).
Catholic Charities has requested the following:
1. Pillows
2. Blankets
2. Brooms
3. Mops
4. Sheet sets
5. Towels
6. Pots and pans, baking sheets
7. Rice cookers
8. Hats, gloves, scarfs ( adults)
9. Beds w/ mattresses and frames, twin, bunk beds, queen
10. Umbrellas/rain ponchos
11. Silverware
12. Drinking glasses
13. Plastic drinking glasses for children
14. Shampoo
15. Deodorant
16. Feminine hygiene products
17. Diapers
18. Shower curtains/liners/hooks
19. Adult sweaters, men and women (small and medium)
Thank you for your solidarity with refugees and immigrants. Please contact graceyulichun@gmail.com or welcominggainesville@gmail.com if you have any questions.
Peace!
August 28, 2017Leave a comment

Each September, Welcoming Gainesville & Alachua County joins the national Welcoming America movement to participate in “Welcoming Week,” which includes a variety of events that celebrate the contributions of immigrants, refugees, and foreign-born residents in our community.

This year’s event will extend over 10 days and include the following programs and activities:

We will also be collecting small household goods for refugees resettled by Catholic Charities Jacksonville and school supplies for refugee children with Gators for Refugee Medical Relief. Please e-mail us at welcominggainesville@gmail.com if interested in donating.

Check back for more information as we update the schedule. Thank you! 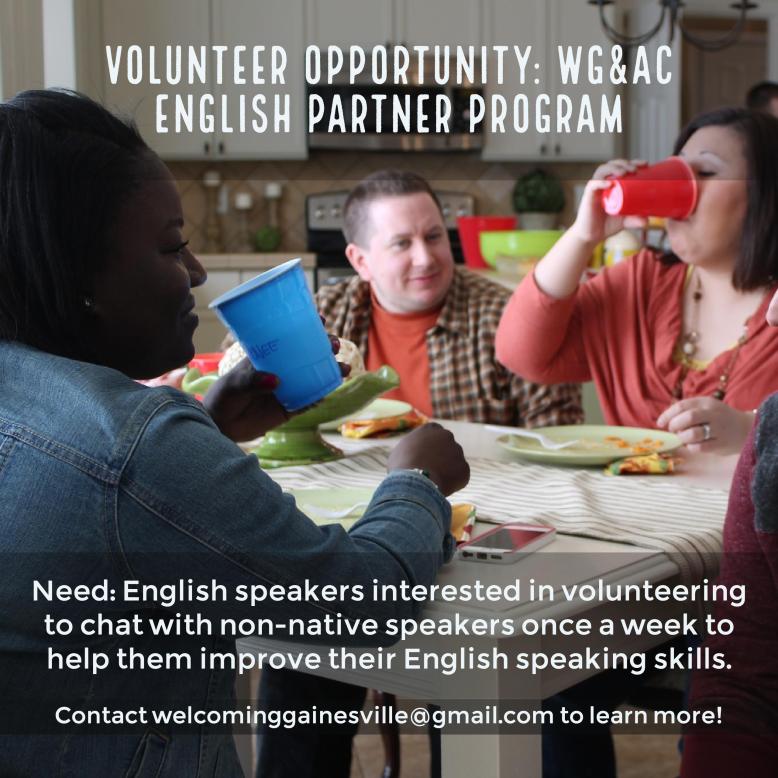 Do you have a free hour each week? Interested in volunteering with us? We’ve had numerous requests from non-native speakers to be paired with English-speaking volunteers for our English Partner Program.

Welcoming Gainesville & Alachua County is pleased to share our 2016 Annual Report, which highlights our achievements and growth during our first official year as a nonprofit organization. 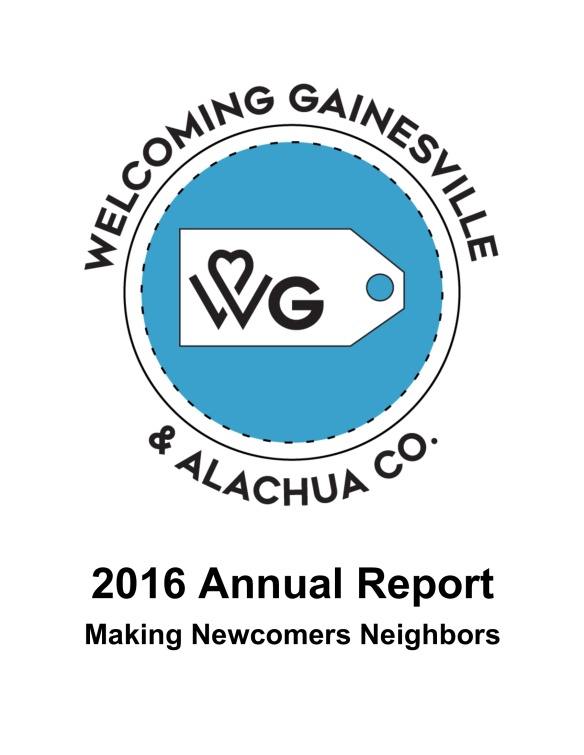 We look forward to “making newcomers neighbors” for many more years to come!

August 1, 2017August 1, 2017Leave a comment
Did you know the majority of refugees and immigrants have never been inside of an American’s home?

The single most important factor in ensuring that newcomers to the United States become integrated and self-sufficient members of society is the support of their new community. Your efforts matter, and we want to provide you with the tools to make a positive impact.

The Refugee Center Online is offering a free online course to help individuals gain the necessary skills and knowledge to better interact with refugees and immigrants in the community. The lessons are self-paced, which means you can start anytime and complete the training on your own schedule.

Remember: Welcoming newcomers doesn’t always have to be formal. It might mean simply being friendly to those in your community. It might mean making a choice to go out of your comfort zone and invite a newcomer family to dinner.